Three monkeys sat on a coconut tree,
Discussing things as they're said to be;
Said one to the others "Now listen, you two
There's a certain rumour that can't be true
That man descended from our noble race:
The very idea is a big disgrace.
No monkey ever deserted his wife
Staved her babies and ruined her life;
And you've never known a mother-monk
To leave her babies with others to bunk,
Or pass them on from one to another
Till they scarcely know who was their mother;
And another thing you'll never see
A monk building a fence around a coconut tree
And let the coconuts go to waste
Forbidding all other monks to taste;
Why, if I'd put a fence round the tree
Starvation would force you to steal from me;
Here's another think a monk won't do
Go out at night and get on the stew
Or use a gun or club or knife
To take some other monkey's life.
Yes, man DESCENDED - with all his fuss,
But, brothers, he didn't descent from US!" 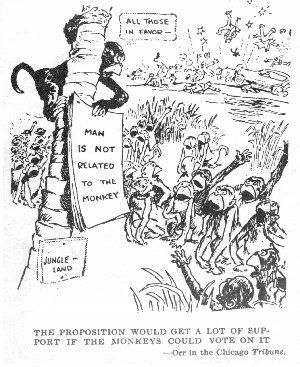 Back to Poems and Short Stories