How did all the animals
fit on Noah's Ark?


A detailed and updated technical study of this and many other questions. 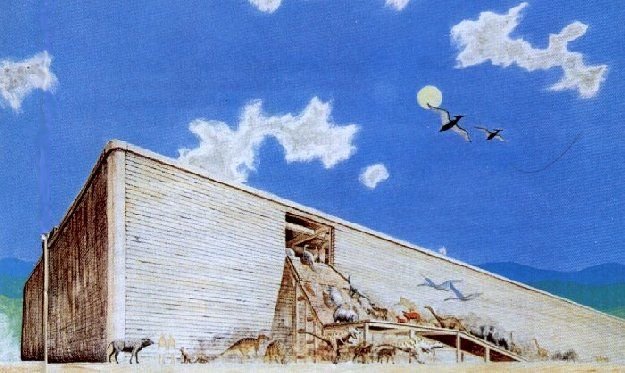 MANY skeptics assert that the Bible must be wrong, because they claim that the Ark could not possibly have carried all the different types of animals. This has persuaded some Christians to deny the Genesis Flood, or believe that it was only a local flood involving comparatively few local animals. But usually they have not actually performed the calculations. On the other hand, the classic creationist book The Genesis Flood contained a detailed analysis as far back as 1961. [1]

A more detailed and updated technical study of this and many other questions is John Woodmorappe’s book Noah’s Ark: a Feasibility Study (see the end of this article). This article is based on material in these books plus some independent calculations. There are two questions to ask:

1) How many types of animals did Noah need to take?

2) Was the ark's volume large enough to carry all the necessary types?

If the animals were kept in cages with an average size of 50x50x30 centimetres (20x20x12 inches), that is 75,000 cm3 (cubic centimetres) or 4800 cubic inches, the 16,000 animals would only occupy 1200 m3 (42,000 cubic feet) or 14.4 stock cars. Even if a million insect species had to be on board, it would not be a problem, because they require little space. If each pair was kept in cages of 10 cm (four inches) per side, or 1000 cm3, all the insect species would occupy a total volume of only 1000 m3, or another 12 cars. This would leave room for five trains of 99 cars each for food, Noah’s family and ‘range’ for the animals. However, insects are not included in the meaning of behemah or remes in Genesis 6:19-20, so Noah probably would not have taken them on board as passengers anyway.

Tabulating the total volume is fair enough, since this shows that there would be plenty of room on the Ark for the animals with plenty left over for food, range etc. It would be possible to stack cages, with food on top or nearby (to minimize the amount of food carrying the humans had to do), to fill up more of the Ark space, while still allowing plenty of room for gaps for air circulation. We are discussing an emergency situation, not necessarily luxury accommodation. Although there is plenty of room for exercise, skeptics have overstated animals’ needs for exercise anyway.

Even if we don’t allow stacking one cage on top of another to save floor space, there would be no problem. Woodmorappe shows from standard recommended floor space requirements for animals that all of them together would have needed less than half the available floor space of the Ark’s three decks. This arrangement allows for the maximum amount of food and water storage on top of the cages close to the animals.

The Ark would probably have carried compressed and dried foodstuffs, and probably a lot of concentrated food. Perhaps Noah fed the cattle mainly on grain, plus some hay for fibre. Woodmorappe calculated that the volume of foodstuffs would have been only about 15 % of the Ark’s total volume. Drinking water would only have taken up 9.4 % of the volume. This volume would be reduced further if rainwater was collected and piped into troughs.

It is doubtful whether the humans had to clean the cages every morning. Possibly they had sloped floors or slatted cages, where the manure could fall away from the animals and be flushed away (plenty of water around!) or destroyed by vermicomposting (composting by worms) which would also provide earthworms as a food source. Very deep bedding can sometimes last for a year without needing a change. Absorbent material (e.g. sawdust, softwood wood shavings and especially peat moss) would reduce the moisture content and hence the odour.

The space, feeding and excretory requirements were adequate even if the animals had normal day/night sleeping cycles. But hibernation is a possibility which would reduce these requirements even more. It is true that the Bible does not mention it, but it does not rule it out either. Some creationists suggest that God created the hibernation instinct for the animals on the Ark, but we should not be dogmatic either way.

Some skeptics argue that food taken on board rules out hibernation, but this is not so. Hibernating animals do not sleep all winter, despite popular portrayals, so they would still need food occasionally.

"If I have told you earthly things, and ye believe not, how shall ye believe, if I tell you of heavenly things?"

Similarly, if the Scriptures can be wrong on testable matters such as geography, history and science, why should they be trusted on matters like the nature of God and life after death, which are not open to empirical testing? Hence Christians should "be ready always to give an answer to every man that asketh you a reason of the hope that is in you" (1 Peter 3:15), when skeptics claim that the Bible conflicts with known ‘scientific facts’.

Christians would be able to follow this command and answer skeptics’ anti-Ark arguments effectively, if they read John Woodmorappe’s book Noah’s Ark: a Feasibility Study. This remarkable book is the most complete analysis ever published regarding the gathering of animals to the Ark, provisions for their care and feeding, and the subsequent dispersion. For example, some skeptics have claimed that the post-Flood ground would be too salty for plants to grow. Woodmorappe points out that salt can be readily leached out by rainwater.

Woodmorappe has devoted seven years to this scholarly, systematic answer to virtually all the anti-Ark arguments, alleged difficulties with the Biblical account, and other relevant questions. Nothing else like this has ever been written before - a powerful vindication of the Genesis Ark account.

"It has just the sort of facts and details that kids find fascinating, and would make an excellent source of information for enhancing Bible study projects and class lessons on the Ark and Flood. Anyone interested in answering the many questions about the ark, especially from skeptics, would be advised to read Noah’s Ark." [7]