The Walls Of Jericho


Archaeology confirms:
they really DID come a-tumblin’ down.

Fascinating recent discoveries reveal something unusual happened to the ancient city of Jericho. Heavily fortified, with a virtually impregnable double wall, what caused her sudden destruction? And find out why it is significant that even her inhabitants’ foodstores could still be seen in our time, where they were left . . .

The name ‘Jericho’ brings to mind Israelites marching, trumpets sounding and walls falling down. It is a wonderful story of faith and victory, but did it really happen? The skeptic would say no, it is merely a folk tale to explain the ruins at Jericho. The main reason for this negative outlook is the excavations at the site carried out in the 1950s under the direction of British archaeologist Kathleen Kenyon. She concluded,

‘It is a sad fact that of the town walls of the Late Bronze Age, within which period the attack by the Israelites must fall by any dating, no trace remains . . . The excavation of Jericho, therefore, has thrown no light on the walls of Jericho of which the destruction is so vividly described in the book of Joshua.’ [1]

Thomas A. Holland, who was editor and co-author of Kenyon’s excavation reports, summarized the apparent results as follows:

‘Kenyon concluded, with reference to the military conquest theory and the LB [Late Bronze Age] walls, that there was no archaeological data to support the thesis that the town had been surrounded by a wall at the end of LB 1 [ca. 1400 BC].’ [2]

However, a careful examination of the archaeological evidence collected throughout this century leads to quite another conclusion.

Before the Israelites entered the promised land, Moses told them that they were now about to cross the Jordan river, to dispossess nations which were greater and stronger than themselves, with large cities having walls that reached, as it were, to the sky (Deuteronomy 9:1). The meticulous work of Kenyon showed that Jericho was indeed heavily fortified and that it had been burned by fire. Unfortunately, she misdated her finds, resulting in what seemed to be a discrepancy between the discoveries of archaeology and the Bible. She concluded that the Bronze Age city of Jericho was destroyed about 1500 BC by the Egyptians. An in-depth analysis of the evidence, however, reveals that the destruction took place around 1400 BC (end of the Late Bronze I period), exactly when the Bible says the Conquest occurred. [3]

Schematic cross-section diagram of the fortification system at Jericho based on Kenyon's west trench. 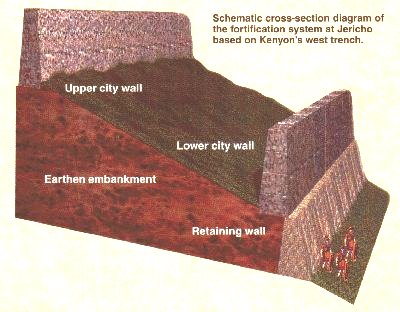 The mound, or ‘tell’ of Jericho was surrounded by a great earthen rampart, or embankment, with a stone retaining wall at its base. The retaining wall was some four to five metres (12 - 15 feet) high. On top of that was a mudbrick wall two metres (six feet) thick and about six to eight metres (20 - 26 feet) high. [4] At the crest of the embankment was a similar mudbrick wall whose base was roughly 14 metres (46 feet) above the ground level outside the retaining wall. This is what loomed high above the Israelites as they marched around the city each day for seven days. Humanly speaking, it was impossible for the Israelites to penetrate the impregnable bastion of Jericho.

Within the upper wall was an area of approximately six acres, while the total area of the upper city and fortification system was 50% larger, or about nine acres. Based on the archaeologist's rule of thumb of 200 persons per acre, the population of the upper city would have been about 1,200. However, from excavations carried out by a German team in the first decade of this century, we know that people were also living on the embankment between the upper and lower city walls. In addition, those Canaanites living in surrounding villages would have fled to Jericho for safety. Thus, we can assume that there were several thousand people inside the walls when the Israelites came against the city.

The citizens of Jericho were well prepared for a siege. A copious spring which provided water for ancient, as well as modern, Jericho lay inside the city walls. At the time of the attack, the harvest had just been taken in (Joshua 3:15), so the citizens had an abundant supply of food. This has been borne out by many large jars full of grain found in the Canaanite homes by John Garstang in his excavation in the 1930s and also by Kenyon. With a plentiful food supply and ample water, the inhabitants of Jericho could have held out for perhaps several years.

After the seventh trip around the city on the seventh day, Scripture tells us that the wall ‘fell down flat’ (Joshua 6:20). The Hebrew here carried the suggestion that it ‘fell beneath itself.’ [5] Is there evidence for such an event at Jericho? It turns out that there is ample evidence that the mudbrick city wall collapsed and was deposited at the base of the stone retaining wall at the time the city met its end.

Kenyon’s work was the most detailed. On the west side of the tell, at the base of the retaining, or revetment, wall, she found,

‘fallen red bricks piling nearly to the top of the revetment. These probably came from the wall on the summit of the bank [and/or] . . . the brickwork above the revetment.’ [6]

In other words, she found a heap of bricks from the fallen city walls! An Italian team excavating at the southern end of the mound in 1997 found exactly the same thing.

Sketch by Gene Fackler of the north side of ancient Jericho. 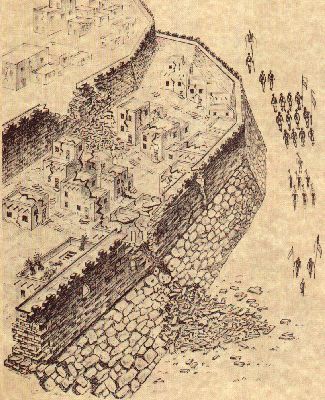 According to the Bible, Rahab’s house was incorporated into the fortification system (Joshua 2:15). If the walls fell, how was her house spared? As you recall, the spies had instructed Rahab to bring her family into her house and they would be rescued. When the Israelites stormed the city, Rahab and her family were saved as promised (Joshua 2:12-21; 6:17, 22-23). At the north end of the tell of Jericho, archaeologists made some astounding discoveries that seem to relate to Rahab.

The German excavation of 1907-1909 found that on the north a short stretch of the lower city wall did not fall as everywhere else. A portion of that mudbrick wall was still standing to a height of over two metres (eight feet). [4] What is more, there were houses built against the wall! It is quite possible that this is where Rahab’s house was. [7] Since the city wall formed the back wall of the houses, the spies could have readily escaped. From this location on the north side of the city it was only a short distance to the hills of the Judean wilderness where the spies hid for three days (Joshua 2:16, 22). Real estate values must have been low here, since the houses were positioned on the embankment between the upper and lower city walls. Not the best place to live in time of war! This area was no doubt the overflow from the upper city and the poor part of town, perhaps even a slum district.

After the city walls fell, how did the Israelites surmount the four to five metre (12-15 foot) high retaining wall at the base of the tell? Excavations have shown that the bricks from the collapsed walls formed a ramp against the retaining wall so that the Israelites could merely climb up over the top. The Bible is very precise in its description of how the Israelites entered the city: ‘the people went up into the city, every man straight before him [i.e., straight up and over],’ (Joshua 6:20). The Israelites had to go up, and that is what archaeology has revealed. They had to go from ground level at the base of the tell to the top of the rampart in order to enter the city.

The Israelites burned the city and everything in it (Joshua 6:24). Once again, the discoveries of archaeology have verified the truth of this record. A portion of the city destroyed by the Israelites was excavated on the east side of the tell. Wherever the archaeologists reached this level they found a layer of burned ash and debris about one metre (three feet) thick. Kenyon described the massive devastation as follows.

‘The destruction was complete. Walls and floors were blackened or reddened by fire, and every room was filled with fallen bricks, timbers, and household utensils; in most rooms the fallen debris was heavily burnt, but the collapse of the walls of the eastern rooms seems to have taken place before they were affected by the fire.’ [8]

Both Garstang and Kenyon found many storage jars full of grain that had been caught in the fiery destruction. This is a unique find in the annals of archaeology. Grain was valuable, not only as a source of food, but also as a commodity which could be bartered. Under normal circumstances, valuables such as grain would have been plundered by the conquerors. Why was the grain left at Jericho? The Bible provides the answer. Joshua commanded the Israelites that the city and all that is in it were to be dedicated to the Lord (Joshua 6:17, Lit. Heb.).

The grain left at Jericho and found by archaeologists in modern times gives graphic testimony to the obedience of the Israelites nearly three-and-a-half millennia ago. Only Achan disobeyed, leading to the debacle at Ai described in Joshua 7.

Such a large quantity of grain left untouched gives silent testimony to the truth of yet another aspect of the biblical account. A heavily fortified city with an abundant supply of food and water would normally take many months, even years, to subdue. The Bible says that Jericho fell after only seven days. The jars found in the ruins of Jericho were full, showing that the siege was short since the people inside the walls consumed very little of the grain.

Jericho was once thought to be a ‘Bible problem’ because of the seeming disagreement between the archaeology and the Bible. When the archaeology is correctly interpreted, however, just the opposite is the case. The archaeological evidence supports the historical accuracy of the biblical account in every detail. Every aspect of the story that could possibly be verified by the findings of archaeology is, in fact, verified.

There are many ideas as to how the walls of Jericho came down. Both Garstang and Kenyon found evidence of earthquake activity at the time the city met its end. If God did use an earthquake to accomplish His purposes that day, it was still a miracle since it happened at precisely the right moment, and was manifested in such a was as to protect Rahab’s house. No matter what agency God used, it was ultimately He who, through the faith of the Israelites, brought the walls down. After the people had marched around them for seven days, it was ‘by faith the wall of Jericho fell down’ (Hebrews 11:30).

As well as showing us how vital it is not to discount the Bible because of some apparent conflict with secular scholarship, Jericho is a wonderful spiritual lesson for God’s people yet today. There are times when we find ourselves facing enormous ‘walls’ that are impossible to break down by human strength. If we put our faith in God and follow His commandments, He will perform ‘great and might things’ (Jeremiah 33:3) and give us the victory.