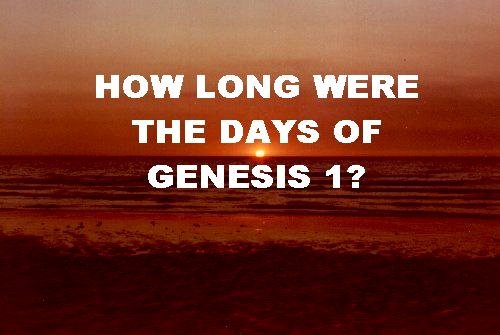 What did God intend us to understand
from the words He used?


Were the days of Creation Week of 24 hours duration or were they long periods of time? This article will discuss the Hebrew 'time' words which the author had available to him and what meaning he intended to convey by his choice of the specific words he used [1].

When Moses, under the inspiration of God, compiled the account of creation in Genesis 1, he used the Hebrew word yom for 'day'. He combined yom with numbers ('first day', 'second day', 'third day', etc.) and with the words 'evening and morning', and the first time he employed it he carefully defined the meaning of yom (used in this way) as being one night/day cycle (Genesis 1:5). Thereafter, throughout the Bible, yom used in this way always refers to a normal 24-hour day [2], [3]. There is thus a prima facie case that, when God used the word yom in this way, He intended to convey that the days of creation were 24 hours long.

Let us now consider what other words God could have used, if He had wanted to convey a much longer period of time than 24 hours.

There are several Hebrew words which refer to a long period of time [4]. These include qedem which is the main one-word term for 'ancient' and is sometimes translated 'of old'; olam means 'everlasting' or 'eternity' and is translated 'perpetual', 'of old' or 'for ever'; dor means 'a revolution of time' or 'an age' and is sometimes translated 'generations'; tamid means 'continually' or 'for ever'; ad means 'unlimited time' or 'for ever'; orek when used with yom is translated 'length of days'; shanah means 'a year' or 'a revolution of time' (from the change of seasons); netsach means 'for ever'. Words for a shorter time span include eth (a general term for time); and moed, meaning 'seasons' or 'festivals'. Let us consider how some of these could have been used.

If God had wanted to tell us that the creation events took place a long time in the past, there were several ways He could have said it:

qedem by itself or with 'days' would have meant 'and it was from days of old'.

olam with 'days' would also have meant 'and it was from days of old'.

So if God had intended to communicate an ancient creation to us, there were at least three constructions He could have used to tell us this. However, God chose **not** to use any of these.


2. A continuing event from long ago

If God had wanted to tell us that creation started in the past but continued into the future, meaning that creation took place by some sort of theistic evolution, there were several ways He could have said it:

dor used either alone or with 'days', 'days' and 'nights', or 'evening and morning', could have signified 'and it was generations of days and nights'. This would have been the best word to indicate evolution's alleged aeons, if this had been meant.

olam with the preposition le, plus 'days' or 'evening and morning' could have signified 'perpetual'; another construction le olam va-ed means 'to the age and onward' and is translated 'for ever and ever' in Exodus 15:18.

tamid with 'days', 'days' and 'nights', or 'evening' and 'morning', could have signified 'and it was the continuation of days'.

ad used either alone or with olam could have signified 'and it was for ever'.

shanah (year) could have been used figuratively for 'a long time', especially in the plural.

yom rab literally means 'a long day' (cf. 'long season' in Joshua 24:7, or 'long time' in the New American Standard Bible). This construction could well have been used by God if He had meant us to understand that the 'days' were long periods of time.

Thus, if God had wanted us to believe that he used a long-drawn-out creative process, there were several words He could have used to tell us this. However, God chose **not** to use any of these.

If God had wanted to say that creation took place in the past, while giving no real indication of how long the process took, there were ways He could have done it:

eth ('time') combined with 'day' and 'night' as in Jeremiah 33:20 and Zechariah 14:7 could have been ambiguous. Likewise eth combined with 'light' and 'darkness' (a theoretical construction). If any of these forms had been used, the length of the 'days' of creation would have been widely open for debate. However, God chose **not** to use any of these.

The following considerations show us what God intended us to understand:

In Genesis 1, God, through the 'pen' of Moses, is going out of His way to tell us that the 'days' of creation were literal earth-rotation days. To do this, He used the Hebrew word yom, combined with a number and the words 'evening and morning'. If God had wanted to tell us it was an ancient creation, then there were several good ways He could have done this. If theistic evolution had been intended, then there were several constructions He could have used. If the time factor had been meant to be ambiguous, then the Hebrew language had ways of saying this. However, God chose not to use any construction which would have communicated a meaning other than a literal solar day.

The only meaning which is possible from the Hebrew words used is that the 'days' of creation were 24-hour days. God could not have communicated this meaning more clearly than He did in Genesis 1. The divine confirmation of this, if any is needed, is Exodus 20:9-11, where the same word 'days' is used throughout:'

'Six days shalt thou labour, and do all thy work: But the seventh day is the sabbath of the LORD thy God: in it thou shalt not do any work, thou, nor thy son, not thy daughter, thy manservant, nor thy maidservant, nor thy cattle, nor thy stranger that is within thy gates: For in six days the LORD made heaven and earth, the sea, and all that in them is, and rested the seventh day: wherefore the LORD blessed the sabbath day, and hallowed it.'